It’s difficult to articulate, in any medium, the hair-raising steepness of San Francisco’s streets.  While scaling these beasts, I often find myself awestruck by the sheer audacity of the engineers (sorry). Filbert St. is often billed (incorrectly) as the steepest street in San Francisco. I’ve shredded and crashed on Filbert St. many times over the years, and while it may not be the steepest, it’s still foolishly steep and remains the de facto litmus test of a Freeborder’s mettle.

So if Filbert, or even 22nd street, are not the steepest, what hill is?

Fortunately, there are others out there pondering the same question and have devised a methodology to figure it out. One of these sources is a San Francisco-centric website named, 7×7,  that partnered with Data Scientist, Stephen Von Worley,  a few years back and produced the following list:

The Real List of the Steepest Streets in San Francisco:

The tools used to determine the grade measurements were a level and builder’s square.  Von Worley also created a pretty cool map by “combining OpenStreetMap street traces and USGS raster digital elevation data” which gave a rough estimate of the grades of streets in the San Francisco.

Zachary Crockett of Priceconomics was the next to build upon this data.  He boldly set out on his quest for the steepest grade with his bike, inclinometer, and Von Worley’s treasure map. He ended up finding a hoard of new hills and listed them by Grade and Neighborhood.  I highly recommend checking out his blog post as there are pictures of several of the streets and it’s just nicely written. 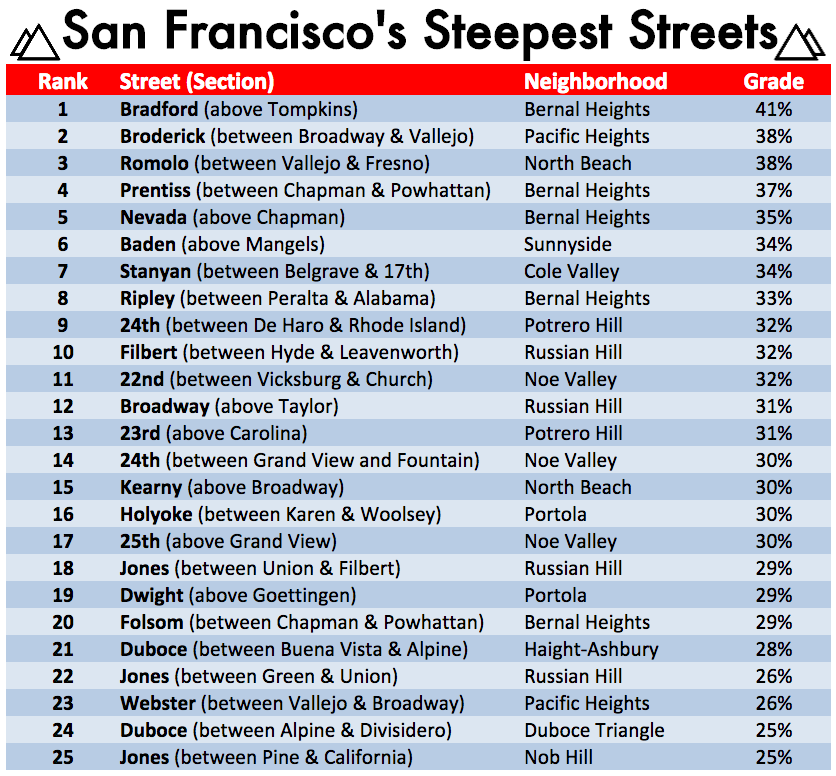 Priceonomics; data via Data Pointed, field research (aka, bike rides through the city)

So there you have it, the steepest street in San Francisco is Bradford St. with a hair-raising 41% grade. Check out the pictures below!